Heading into San Francisco was surreal! With Berkeley Marina as our destination, we followed a container ship in. Todd in full navigation focus, with crew member Scott as co-pilot on Navionics, we came into the moonlit, twinkle lit San Fran Bay, with full focus. The animals were on freak out. I had to lock kitten in the head, as she kept wanting to join us in the cockpit and, as mentioned above, with full concentration of navigating SF Bay, no one could focus on kitten. We didn’t want to perform kitten overboard drill, in such a complicated entry. Shay and I argued about who’s in charge of Snowy pup, who was being high maintenance. I’m on buoy & crab pot watch. I cannot be on Snowy watch too. It was getting darker by the minute as the Golden Gate Bridge became closer and closer. It was lit up like a warm lit fireplace. It was almost glowing. I found it hard to “be in the moment” as exactness, navigation watch was needed. I struggled with enjoying the moment and being crew. With Snowy finally in cockpit, and finally releasing a gigantic pee on her gifted grass pad from Coho rally member, she calmed enough for me to break away and go up on topside, with my camera phone. I lied on my back and documented the glory of cruising under the Golden Gate Bridge, at night, on our S/V the Answer. Epic moment! Once in a lifetime! Will never forget it! I am grateful to have taken great pics to document this amazing moment, and posted them on Facebook. 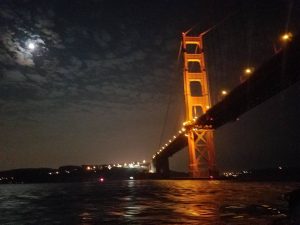 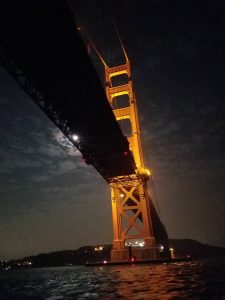 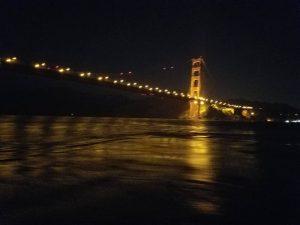 Just when I thought cruising under the GGB, at night, was unreal, cruising under it in broad daylight with a zillion expensive sail boats, all around us, was just as epic. Todd and I were in awe of these high-end sailing boats burying the rail, full sails up, in solid 20-25 knot wind. It was a sight and it was fun to be in the thick of it, sharing over crowded SF Bay, on our departure. It was nostalgic to look up, at the awesome golden bridge, and remember walking over it, just days before. 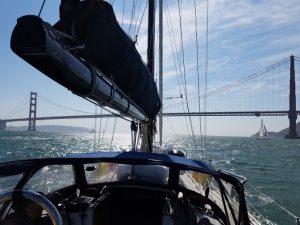 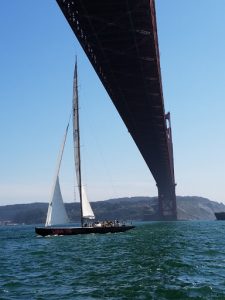 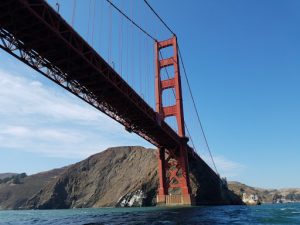 The icing on the cake was the tanker ship passing us right after we cruised under the immense bridge. It was the same tanker that appeared on our AIS all the way down South to Monterey Bay. In some strange way, it was comforting seeing the massive tanker ship in our AIS, as if we were “buddying” South together. When we got hit by the squall “microburst,” around 2am, I remember wondering if our tanker “buddy” even felt it….not fair!!! 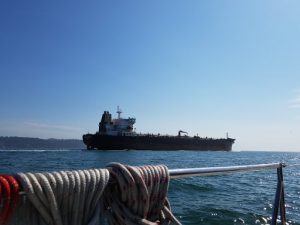 Have Been Cruisin For